A blast of prose from my past…going through my files.

I woke up this morning thinking about what my dead cat looked like when I discovered her lying on my bathroom floor three years ago. My female calico of 14 years, with long hair and eyes that looked like they had been lined in kohl, was stretched out ridged as an ironing board, with her blue eyes open, staring blankly. At the time, what struck me was she was now dead. To put it dramatically, I was looking at the face of death. There was no light in her eyes, no movement, no energy, no dance, no play, no expression. Wow – it made me think, death is pretty lifeless, not much going on. Shocking, in fact. Perhaps taking life for granted, and the adage, “Life is a bitch and then we die,” is a bit too cynical. Perhaps, that look my dog gives me when he has not seen me for a few hours, is actually precious and tied to a force more powerful than gravity. Maybe the force is love. 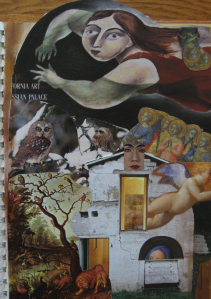 I contemplated what it would be like to be faced with death each day, forced to face the absence of light in the faces of the bombed or butchered. If I lived in Palestine or Iraq or somewhere one cannot escape the faces of the dead, where the dead are not taken away in the middle of night and sanitized by undertakers, placed in $5,000 velvet-lined coffins, and placed in immaculately manicured cemeteries, then grieved over by the well-dressed and well-fed still living, would I become desensitized? Or, would that spark that animates trees and waves and wild horses become even more precious? Would the miracle of seeing your grandmother live to be 100 seem even more miraculous?

But, I live in a world where I don’t see many dead people, and so, seeing Cinnamon my cat, stretched out, was a shock. I didn’t understand my tears. After all, she was old and had been ill for a very short while, and her death was merciful and natural, but I still cried looking into the face of death and felt the loss of her. And then it took me over – that we are all made of more than our miraculous flesh and bone. We are animated by that abstract something we call life, that mysterious energy that puts light into faces, and makes our eyes shine with love and hate, and makes our bodies climb mountains, and makes fish jump in the water, and the flowers bloom. And, it hit me like a gentle yet forceful wind that without life, the moon would not shine and the sun would lose its heat, and the planets would collapse, and the wind would cease, and the tides would no longer hypnotize lovers, and the stars would lose their mystery.

Perhaps I should let go of being pissed at life for its brutal blows and heartbreaks, at least for long enough to consider the possibility that our pain is part of the mysterious spirit we call life, and cannot be removed from that to which it is intimately connected.

Ring the bells that still can ring
Forget your perfect offering
There is a crack in everything
That’s how the light gets in.– Leonard Cohen