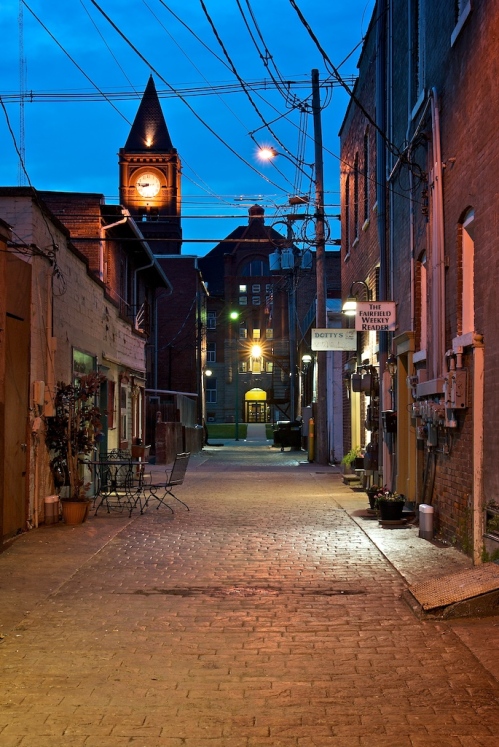 “‎The simple truth is that you can understand a town. You can know and love and hate it. You can blame it, resent it, and nothing changes. In the end, you’re just another part of it.”
― Brenna Yovanoff

Photographers capture moments and freeze them in time. They catch configurations of light and dark, objects and space, people and things, that tell stories and reflect back to us where we have been and who we are in the world.

I love Guy Harvey’s photography, and of course, his photos of Iowa and particularly of Fairfield, are part of my story. How many times have I walked this Alley with its bricked paved road and the storefronts of local small business owners? There is Dotty’s Sewing Nook, owned by Dotty, of course – she’s been there since before I arrived in town in the early 80’s. Then there is this view of the Fairfield Courthouse with the steeple and clock. The Fairfield Weekly Reader, the small local paper where we find out what’s playing at the Coffee House or what apartments are for sale, or who has just started up a new business, has moved to another location, still in town. Paving the alley was part of a beautification project headed by locals who procured the resources – this project represents hours of care and attention, hard work, commitment, and love.

We live moment to moment and the artist captures fleeting time and anchors our life experiences to give us roots and a sense of belonging.

Filed under Iowa, Life in Fairfield Iowa, Topics I Love

Things I Love in Fairfield Iowa

It’s easy to take the beauty of our surroundings for granted…to daydream that it’s better somewhere else. Sometimes, I think about oceans – I love oceans. I remember trips through the mountains – mountains are beautiful. When you live in the Midwest, you have hay bales. You have lots of sky and space. 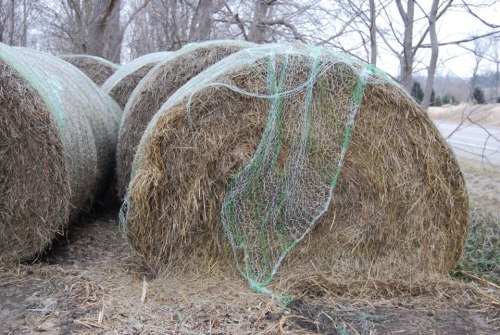 You have lots of things to be grateful for.

As the the great Buddha said,

“The secret of health for both mind and body is not to mourn for the past, worry about the future, or anticipate troubles, but to live in the present moment wisely and earnestly.”
— Buddha

Today in Fairfield, Iowa, it’s fall and the the air is fresh and the sky is big and I’m grateful.

Filed under Iowa, Life in Fairfield Iowa, Topics I Love

Tagged as Iowa, life in fairfield iowa, Life in Iowa, living in the present moment, the Buddha says, the midwest

Why Oprah Came to Meditate in Fairfield Iowa

Oprah Meditating in the Golden Dome

Now my little town of Fairfield, Iowa, has once more been put on the map – this summer Oprah Winfrey came to meditate with MUM’s yogic flyers in the Golden Dome for women.

Why in the world would Oprah Winfrey come to Fairfield, Iowa, a tiny Midwestern town in the middle of cornfields, which boasts approximately 9,464 people? Oprah can be anywhere at any time doing anything she pleases, her time is money, and her schedule grueling. In Fairfield, there is no spectacular scenery, no ocean front properties, no mountain views, or sandy beaches, and no redwood forests.

Okay, we have a cute town square, and she did show up at my favorite coffee shop on the square and chatted up the locals—the coffee is spectacular but not enough of a draw for Oprah. But, you know Oprah, she is not one to put on airs.

And, there is Maharishi University of Management (MUM), formerly Maharishi International University, founded in 1973, by the late world-famous, Maharishi Mahesh Yogi. There is the largest population of TM meditators in the world. And, there are the Golden Domes of Pure Knowledge (yes, these are literally golden dome-shaped structures) where advanced TM meditators can come together to FLY (up for debate) and meditate in a group for world peace and personal enlightenment.

And, Oprah, a new meditator, who would normally not be allowed to meditate with the yogic flyers, was invited to join the hundreds of women who do their meditation “program” together morning and evening—Super Radiance—in the dome designated for women. Oprah claims to have found kindred spirits among the spiritual seekers in Fairfield and elsewhere who have chosen this form of meditation as a path to enlightenment and development of consciousness. She has described meditating in the dome as a, “powerfully energizing yet calming experience” of deep inner stillness and “didn’t want it to end.” When it did, she “walked away feeling fuller than when I’d come in…full of hope, a sense of contentment, and deep joy.”

Do you mediate? I do.